Over the years, Psilocybin (A.K.A magic mushrooms) has gained popularity for giving people transcendental spiritual experiences and enables members of ancient tribes such as the Aztecs to talk to their gods.

In recent times, a trend is going around researchers that proves that shrooms may not necessarily be the harmful and addictive drugs they are originally thought to be. They are now being acknowledged for being the key to absolute healing for human beings.

Here are the eight major benefits of Psilocybin Mushrooms:

If you are someone who gets anxious easily, this is good for you. The use of Magic Mushrooms (Psilocybin) can aid you in reducing your level of anxiety. A recent study by a team of scientists at John Hopkins proved that moderate amounts of shrooms along with psychotherapy aided terminally ill patients deal with anxiety and depression caused by the knowledge of their condition. Almost, all of the participants about 80% experienced significantly reduced anxiety and depression after they were treated for 6 hours. These results were reported to still be evident after about 6 months from the day of treatments. 83% of patients reported that they grew more satisfied with their standard of living, while two-thirds admitted that their psilocybin session was one of the best things that has happened to them in life.

2. It helps to fight depression

The stats are unpopular, but Canadians are highly rated as one of the top users of antidepressants in the world. According to the statistics, as much as 9% of Canada’s population is taking one medicinal supplement or the other for fighting depression. Fortunately, a lot of studies are ongoing on the benefits of psilocybin therapy in the treatment of depression. Psilocybin therapy has been tagged with the breakthrough therapy status by the FDA for the treatment of depression.

One of the most promising studies on magic mushrooms is a 2017 study carried out by Imperial College London which discovered that psilocybin may effectively trigger better functioning of key parts of the brain which are known to play a role in depression. Another research also proved that psilocybin when combined with psychotherapy can improve one’s emotional responsiveness. It also suggested that the substance works without having an adverse effect on the emotions of the patients as observed with using conventional antidepressants.

If you are familiar with obsessive-compulsive disorder (OCD), which is a condition that is associated with the development of unreasonable thoughts and fears that result in compulsive behaviours like constantly washing your hands for fear of infection, or the need to keep things in a definite order. Patients with bipolar disorders are usually the most affected. Studies carried out by the University of Arizona showed that magic mushrooms were able to successfully mitigate the symptoms related to this disorder.

Psilocybin was reported to work together with various serotonin receptors in the brain, such as those which control certain brain regions of individuals with OCD by Dr. Francisco Moreno and Dr. Brian Bayze of the University of Arizona. By administering multiple doses of shrooms to the patients, the binding activity of serotonin receptors was altered thereby reducing such symptoms.

4. It helps in dealing with addiction

If you are suffering from an addiction to smoking, alcohol, or cocaine, psilocybin mushrooms can provide the answer to breaking these habits. A study conducted by John Hopkins University researchers revealed that psilocybin therapy aided participants to abstain from smoking for about 12 months during which follow-up was done.

An associate professor of psychiatry, Matthew Johnson, who led the study at the University believes psilocybin can potentially treat the resulting disorders of substances like alcohol and cocaine addiction. The patients can be shaken out of their narrowed mental and behavioural cyclical routines through psilocybin therapy sessions. 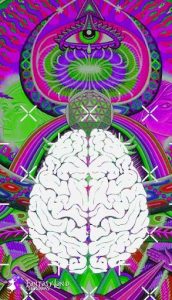 It is apparent that psilocybin can help the brain develop new connections across its different regions, it can also help the growth of neurons in the brain. In a study done by the University of South Florida, results showed that psilocybin enabled lab rats to overcome their fear by promoting the growth of new neurons in their brains, in a process known as neuroplasticity. In other words, psilocybin repairs and develops brain cells by binding itself to receptors in the nerve cells that stimulate healing. Dr. Briony Catlow, who led the study, hoped the findings can be extended to humans in clinical trials.

6. It boosts your creativity

It is not a secret that Psilocybin can improve your mood. When consumed in high doses, it can send you into a euphoric state, but they also promote a sense of creativity and insightfulness even at lower doses known as microdoses. The study showed that participants who microdose on psilocybin developed more ideas on how to solve a task. The researchers discovered that the patients were more fluent, receptive to suggestions, and original in the possibilities they came up with.

7. Magic mushrooms can alter your personality

Even though the elevated brain function generally returns to normal after psilocybin psychotherapy sessions, studies have shown that some effects can last longer. A study found that psilocybin can result in long-term alterations in behaviors, attitudes, and values. While researching its effect on five broad areas of personality- neuroticism, extroversion, openness, agreeableness, and conscientiousness, it showed that there was a significant improvement in openness following the administration of a high-dose psilocybin session.

Openness means the attitude of a person towards new experiences, and it functions with characteristics like imagination, creativity, and aesthetic appreciation. The researchers reported that openness not only increased during the psilocybin sessions with participants, but almost 60% of the participants still maintained a significantly higher level of openness much more later. However, those whose personality are altered are only the ones who had a complete mystical experience during their high-dose session. The study further explained that the high dose should be administered under supportive conditions.

8. It has the potential to treat Alzheimer’s

Due to the findings that Psilocybin promotes neuroplasticity in the brain, psychiatrists like Prof. Roland Griffiths from Johns Hopkins University School of Medicine saw an opportunity to study the effects of psychedelics in people with early Alzheimer’s disease. Studies into that haven’t being ventured into yet but for now, they know that they can treat depression that comes with an Alzheimer’s diagnosis using Psilocybin drugs.

While magic mushrooms truly provide the health benefits illustrated above, be reminded that the higher doses were administered in a controlled clinical situation. If you are inexperienced in taking psilocybin mushrooms we strongly recommend that you start your psychedelic journey by microdosing then increase your dosage as you get used to their effects.

Fantasy Land Shrooms are Canada’s #1 online mushroom dispensary committed to providing the finest quality of microdoses of psilocybin mushrooms to customers anywhere in Canada. Whether you need a good place to order magic mushrooms safely or you simply want to get quality medical psilocybin to enhance your creativity and productivity, they are your number one service provider. Fantasy Land Shrooms stocks only the best products for your satisfaction and their delivery covers all of Canada. You don’t want to miss out on the 20% discount promo offer. You can make use of the promocode FANTASY20. They are the best shroom store in Canada you can patronize for exclusive services.