MICRODOSING MAGIC MUSHROOMS
Magic mushrooms are known to have large effects on the mind and brain. In recent times, microdosing magic mushrooms have become widespread. More and more people keep testifying to the life-changing effects of magic mushrooms and this has made it become more accepted in various cities.

What does microdosing mean?
To microdose means to take a very little dose. In clearer terms, microdosing means taking very little and unnoticeable amounts of a psychedelic, like magic mushrooms. The logic behind this is that, since magic mushrooms are psychedelic substances and consuming them has a direct effect on the brain, taking very little doses will give the same effect without the ‘high’ effect that usually comes with it.
When you microdose magic mushrooms, the psilocybin that gives the trippy effect of magic mushrooms can function as nootropics. Nootropics are simply artificial or natural substances that may bring about a positive effect on mental skills. They are also commonly referred to as smart drugs. Nootropics enhance the performance of the brain and boost memory and cognitive abilities. There are several types of man-made and natural nootropics like Lion’s Mane, Creatine, Caffeine, or even prescription nootropics. 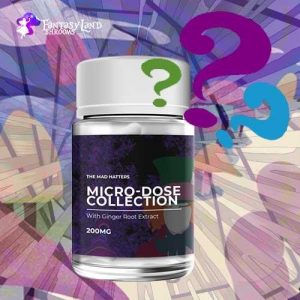 Psychedelic substances like the psilocybin in magic mushrooms are similar to serotonin. Serotonin is a chemical that affects many things that we do, from processing information to giving emotions. It is one of the most important neurotransmitters to the brain. Psilocybin works similarly to serotonin and this makes the brain produce an effect like serotonin. The major effect that psilocybin has on the brain is that it stimulates a serotonin receptor called ‘5-HT2A’ that is located in the prefrontal cortex. When this receptor is stimulated, there are two major effects: the production of Brain-Derived Neurotrophic Factor(BDNF) which enhances activity and growth is triggered and the transmission of the neurotransmitter responsible for cognition and memory, ‘Glutamate’, is increased.

Benefits of Microdosing Magic Mushrooms
There have been reports and testimonies of more energy, enhanced relational skills, increased creativity levels, and more focus caused by microdosing psilocybin on a regular basis. There is no gainsaying that when these effects are brought together, it can enhance job productivity and satisfaction. Also, it may help those that are not sure of their career by giving them explicit direction.
Additionally, microdosing psilocybin has been proven medically to clear cluster headaches which result in long periods of abatement. It can also reduce anxiety levels and mood disorders.
Due to the fact that magic mushrooms are seen as ‘holy babies’, they have a spiritual side to them. It enhances altruism and spiritual awareness generally.

Conclusion
When you microdose magic mushrooms at the right dosage, you are embracing all the positive life-changing effects while leaving out the embarrassing or unpleasant aspects out of your experience.
Order your magic mushrooms in Canada online now at Fantasy shrooms. You can be sure of the originality of our products. Also, there is no delay in our delivery. The demand for magic mushrooms is on the rise. As a bonus, you get 20% off your purchase when you use this promo code Fantasy20.
order now!