Some have claimed that mixing drugs is a no go zone. There are stories of users who’ve experienced not just bad trips, but also stints in hospital, and in the worst case scenario – death. Those who are into poly-drug use say that mixing synthetics can be a problem, but it’s a different story when it comes to natural stuff like weed and magic mushrooms.  So who’s right? Let’s look at the individual effects of the two to get a better understanding of how they work together.

THC is the primary active compound of the cannabis plant. When it gets to the brain, it binds to cannabinoid receptors to create the high that users experience. The effects of cannabis have been variously described as stimulating, exhilarating, and relaxing depending on the strain you use. Strains are generally categorized into two types – sativas and indicas. Sativas are considered more stimulating, while indicas are more relaxing.

Cannabis affects your senses mainly through your visual perception, where colors appear brighter. Music will also sound more beautiful while the taste of food and aroma become more enjoyable.

As for your mood, cannabis makes you feel upbeat. You’ll get funny spur of the moment thoughts, although they may also be insightful and in some instances paranoid. Thoughts that are at first clear become clouded as lethargy seeps in.

Cannabis users also typically experience the munchies, drowsiness and an altered perception of time. They may also feel more sensual and a heightened libido.

psilocybin – the active ingredient in  magic mushrooms – works by binding itself to receptors in your brain. In this case they are serotonin receptors responsible for the communication between nerve cells.

When you take shrooms, the first feeling is that of a pleasant energy coursing through your veins. Your entire psychological functioning is altered as you go through a transient state between being awake and sleep. You’ll feel an uplift in your mood, clarity in your thinking and a deeper level of introspection.

Once the full effects kick in, about an hour after ingesting psilocybin(mushrooms) you will start to go through changes of perception like illusions, loss of sense of time and synesthesia. Visuals will become more enhanced including seeing things like halos around lights and sometimes even geometric patterns when you close your eyes. As is the case with cannabis, your magic mushroom trip will depend on the dosage and strain you take. Of course, small dosage of either have a different effect than a full dose.

When all is said and done weed and magic mushrooms have an uncanny likeness to each other. For starters, both affect your thought process and perceptions in certain ways. They lift your mood to the point of elation, trigger creative thoughts, and enrich the beauty of music, art and nature in general. However, they also have a dark side and can open a Pandora’s box, bringing to the surface any inner demons and deep-rooted bad feelings you may have.

HOW DOES MIXING CANNABIS AND MAGIC MUSHROOMS FEELS LIKE?

So what happens when these two components come together? Well, it depends on the person (how drug tolerant they are) and the timing. When everything falls into place, a melting pot of cannabis and shrooms will intensify your psychedelic experience. 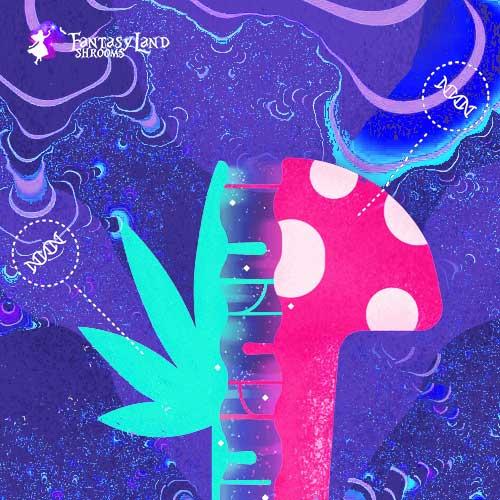 It’s always best to let the magic mushroom trip take the center stage, while cannabis plays a more supporting role. That means taking it easy on the weed. If you’re smoking, don’t overdo it – no big joints or bong rips. Just small puffs to first test the waters and then playing it by ear from that point.

Psychonauts who’ve learned to get the best out of the two avoid smoking weed during the peak. They say cannabis taken before the mushroom come-up helps to temper it. It also gives the peak an edge, and prolongs the come-down. Those who have more weed tolerance smoke before the peak then wait for the come-down before taking some more cannabis. Again, this is a fine balancing act, if you overdo it you may completely reignite your high which may not be very pleasant.

One heads up we can give users who mix weed and magic mushrooms is to start with low-THC, sativa-dominant strains. Something else to consider is that sativa strains provide that extra bit of energy and positivity, while indica a CBD-rich strain helps fight off nausea and manage any jittery feelings that may creep up.

Of course things may not always go according to script. Sometimes cannabis induces lethargy and dulls any visuals you’re likely to experience as well as numbing your sensations. In short, your psychedelic peak could end up becoming an anti-climax.

Combining cannabis and shrooms can also trigger a bout of paranoia and anxiety, not to mention there’s the risk of getting mired in negative or repetitive thoughts and emotions. The worst part is that if you’re having a bad trip it’ll feel even longer because of the disorientation of time that comes with taking mushrooms. And in conclusion, Weed and psilocybin can be a wonderful combination, when done right. The weed can reinvigorate your shrooms trip when it goes off-peak and make the whole experience smoother. However, when your timing is off, or your head’s simply not in the right place, combining the two can dampen the best parts of the trip and unleash chaos. If you have any doubts, it’s better to err on the side of caution and not mix the two.

In case you are pondering about where to get quality and affordable mushroom, I recommend Fantasy Shrooms they offer the best quality services when it comes to shrooms. Try them today and you won’t be disappointed. They currently offer a 20% discount when you purchase from them using the promotional code FANTASY 20.